The gift of Cancer…our journey 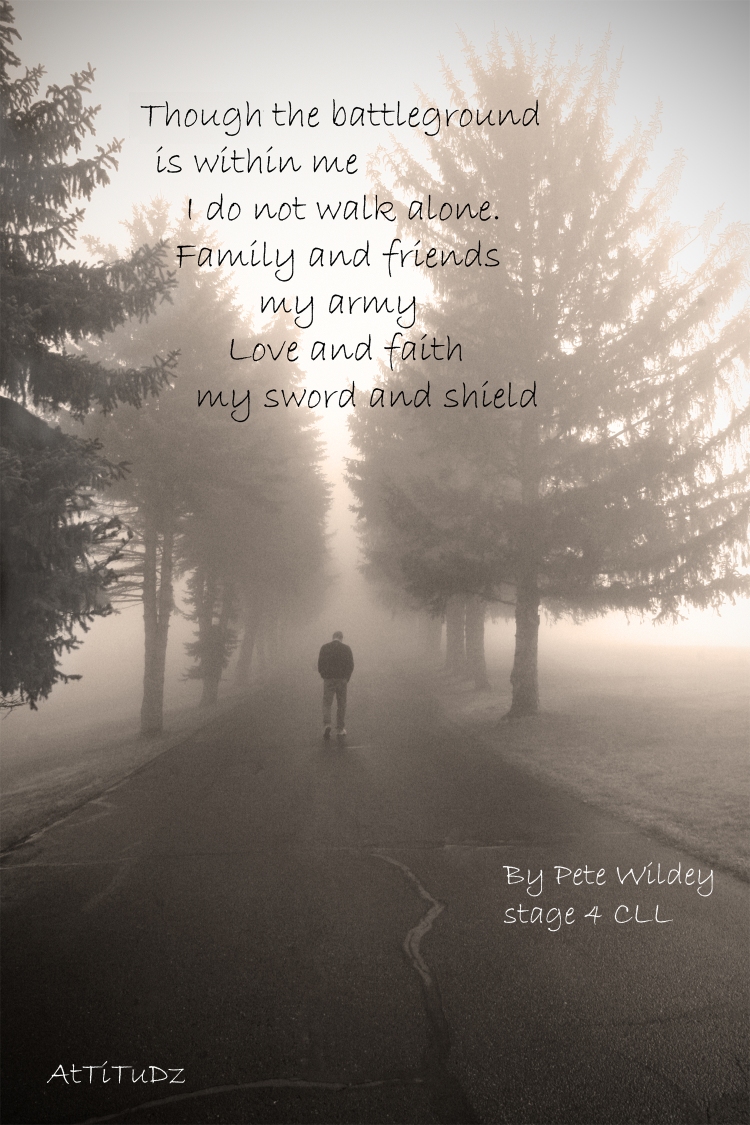 As I near the end of my yearlong clinical trial treatment for my CLL, I find myself reflecting a lot on the events over this past year or so. I have met a lot of people, fellow warriors fighting alongside me. They all shared with me their own horror stories of diagnosis and the road that brought them to this same treatment center. Most have similar stories to mine where their (trusted) doctor misdiagnosed them several times until it was nearly too late! Even as I see their victories over cancer, I know that cancer is not easily beat and often rears its ugly head at a later date and, often, in a different form.

Some of those I have met are on their second, third or even fourth bout with the beast! I’ve read the statistics and while great strides in new treatments are emerging, my brain can’t keep from thinking about the obvious: Some of those great warriors I’ve come to know and feel close to, will not make it.

These thoughts keep me from getting ‘too close’ with them. Yes, we exchange phone numbers and email addresses, but have yet to make any contact outside of the infusion unit. I imagine it is much the same with the staff. I am sure that if they work there long enough, they will see many who don’t make it. I don’t think the treatment center has a specific policy on patient/staff relationships, but would they really need to state the obvious? I think it’s one of those ‘unspoken policies’ they all pretty much adhere to, much like I do.

Probably the number one thing this past year has taught me is this: It’s okay to recognize and even embrace the hard facts. Denial is one way to deal with something that is overwhelming, but eventually it must be dealt with. By recognizing and embracing these sobering, cold hard facts, I can see the mountain I must climb and concentrate on my climbing path. The fog is lifted and I am able to see all the other souls there. They reach out to me offering a hand to help me over the next obstacle. In turn, I begin to reach out to others and together, we climb. Together we make the best of a crappy situation and enjoy the views along the climb.

My mountain started with the great joy of getting married followed by the great pain of losing my brother. Not even a month later I learned that one of my closest friends was battling breast cancer. 2 months later, I was diagnosed…I had no time to enjoy being a newlywed. I had no time to grieve the loss of my brother or comfort my best friend. So many huge emotion filled events were getting stacked one upon another. My children pulled away and fell silent (still trying to absorb my new bride played a part I’m sure) some friends and relatives pulled away, but others stepped forward and held me up.

We all have battles that are devastating. Some keep them very private while others share their wounds. Sharing my battle publicly was a choice my wife and I made after much discussion and soul searching. While parts of my battle are still private, the bulk of it is out there in hopes that it will help others. I know how much my brother’s battle has helped me. He wasn’t as public about it, but I am confident he helped others even if they never acknowledge it publically. Much of what my brother taught me was not immediately recognized or appreciated. God how I wish he was still alive today to talk to! I can’t tell you the number of times I have wanted to call him and lean on him. He was always a good resource for me when it came to life’s little tragedies. I admired how he embraced his harsh realities. Nearly 30 years earlier, he beat his drug addiction and alcoholism by acknowledging it, then planning the next step away from that lifestyle. Perhaps that’s what gave him the strength to fight such a valiant fight with CLL? His setbacks never pushed him off the trail. Steve was always focused on the next foothold even at the end when that foothold was the one that took him to heaven… He knew it was time. He embraced and comforted all who were there to comfort him! I am just so in awe of his grace and dignity right to his last breath!

So as the end of treatment nears, I realize that that end is another beginning. My journey will not end, but rather evolve into the next chapter. I will always have my sensors out scanning for the possible return of cancer, but it will not be my focus. I will not let cancer steal my mind, but rather submerge my mind into life’s adventures that lay ahead. The mountain will flatten and the path will be smoother and wider. I will live with a deeper knowledge of life and death, love and faith and never take a single day for granted.